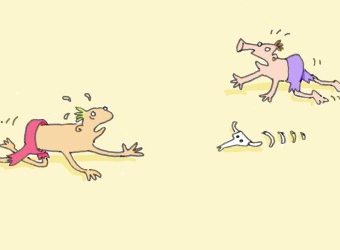 There is one saying that never made a whole lot of sense to me.

“Hope for the best. But, prepare for the worst.”

Poor little Timmy never did well in school. He almost always failed his exams. When his parents asked him why he did so poorly in school, Timmy replied:

“I hoped for the best. But, I prepared for the worst.”

It turns out that this saying goes all the way back to Biblical times. The Jewish people were slaves in the land of Egypt. They worked to the point of exhaustion building the pyramids. However, one day, Aaron, who normally came home completely exhausted, was bounding with excited energy. He was holding a brochure in his hand.

“Miriam!  Our days in Egypt are over. Look what Moses gave me.”

Miriam looked at it, and said: “It’s a brochure. What’s the big deal?”

Aaron replied, “It is not any brochure.  Read it! “Tired of Egypt in the Winter? How about Israel in the Spring? It is the Land of Milk and Honey. Time to take advantage of your new life living in the lap of luxury.”

Miriam looked at it, and started reading the small print. She looked at Aaron, and read the small print out loud: “Limit of Liability: While we expect to arrive in Israel in the Spring, delays should be expected. Upon arrival, expect to be welcomed by a hostile population. Please be advised that by agreeing to go on this trip, you are waiving all rights to bring any legal action against Moses & Company and any of its affiliates. Be forewarned that while we do hope for the best, we will only be prepared for the worst.”

Miriam then turned to Aaron and said: “I do not know about this. What does that mean, “only prepared for the worst”?”

Aaron quickly replied: “This is good. This means that they will be prepared for every problem, big or small. In other words, it means you can go on this trip without any worries, other than we will no longer be slaves in Egypt, and life in Israel will be filled with milk and honey.”

All the Jewish households had similar conversations, and everyone signed the contract to go on the trip to the Land of Israel. They had been told that the departure time was 6 PM, but it turned out to be 6AM. Everyone got out of bed, and half asleep, they packed up and began on their journey. The bread makers did not have time to let the dough rise, and the portable ovens could only manage to make crackers that tasted a bit like sawdust. When people complained to Moses, he turned to the people and said:

“We hoped for the best. But, we only prepared for the worst.”

They continued on their journey that appeared headed towards the Red Sea. The Egyptians were upset that the Jewish slaves were all leaving. Pharaoh sensed that letting these slaves leave would hurt him politically. More importantly, he saw that this upset his wife, who was still angry over losing their first born child that Moses claimed responsibility for. Acting quickly, Pharaoh sent his army to go after the Jewish people and then return them back to the land of Egypt.

The Jewish people saw that they were approaching the Red Sea, and heard Pharaoh’s army with their many chariots stampeding behind them.

One of the leaders, Nathan, turned to Moses and asked:

“Now that you have taken us to the Red Sea, where are the boats to take us across? Surely, you would not have taken us on a journey straight to the Red Sea unless you had ready and waiting for us a beautiful giant cruise ship. Wasn’t a cruise included in the trip? I went on a cruise once, and I can tell you this. The food was delicious.  It was all you can eat and drink, no less!  The entertainment was amazing. You think that I really care about this milk and honey. I signed up only just for the cruise. You know, your great great great great grandfather Noah built a cruise ship. I heard it was amazing. They say that it even had a zoo on the ship. Can you imagine that!”

Moses shook his head, and said to Nathan:

“There are no cruise ships. There no small boats. There are no rafts. Not even a cardboard box to float across on. You see, as I said in the brochure, I was hoping for the best, but I only prepared for the worst.”

Moses then looked up to the sky, and raised his staff and said:

Once across the Red Sea, the Jewish people found themselves in the middle of the desert. It was hot in the desert, but the Jewish people were amazed when they came upon a beautiful mountain in the middle of the desert.  Everyone wanted to go up the mountain where it was cooler. They were all very thirsty and hoped to find delicious mountain spring water climbing up the mountain. However, Moses told the people that they would have to stay down at the bottom of the mountain. He reminded them:

“While we hoped for the best, we only prepared for the worst. The worst is that you stay down here in the dry heat while I go up on special orders.  It is even worse for me because I have problems with high altitudes. Also, I can tell you that the last time I was up there, there was this burning bush. The fire ruined my best toga outfit. And, the burns. I still have the scars!”

The people were not happy, and Nathan told everybody not to worry. He explained:

“Look, I brought with me this giant golden calf. I got it specially made at the Idol Emporium in Pyramid City. We will throw a giant party with no social distancing, and we will all dance around this giant golden calf. That will help to take our minds off being stuck schvitzing at the bottom of the mountain in the middle of the desert.”

Unfortunately, something was wrong with the giant golden calf. Anyone who go close to the calf came down with a mysterious virus. They named this virus Covid 1000BC. People were suffering, but they saw Moses coming down from the mountain, and they saw in him some new found hope.

“Did you bring down a vaccine?”

“No vaccine, but let me tell you. I got a bad cold climbing up and down the mountain. But, I met with G-d and G-d gave me these two tablets with the Ten Commandments. These Ten Commandments will allow you to be better prepared and teach you how to hope for the best.  However, with the vaccine, let me again remind you that while we hope for the best, we only prepared for the worst.”

Unfortunately, the people who all touched the golden calf all did not survive, and the rest of the Jewish people continued on their journey. Spring time came and went, and it did not seem that they were any where close to getting to the Promised Land.  Somebody was brave enough to ask Moses if he had brought a map with him so they would know how to get to the land of Israel. Surely, he was smart enough to take a map with him.

Moses shook his head and said:

“I have no map. I was hoping for the best, but I only prepared for the worst.”

Summer, Fall and Winter came, and they were no closer to getting to the Land of Israel. The people were hungry, and thankfully, manna came from the sky and turned to food. The only foods that it turned into was borscht made out of cabbage and beets, cheese belintzes, and potato pancakes. For these three foods, there was an endless supply of sour cream.

Because the borscht was bright red in color, and the people finally got tired of eating borscht all the time, they began to use the borscht to create a bright red line in the sand as they made their way across the desert. For forty years, they were lost in the desert since they had only been going around in circles. Someone figured out that they could create the line of red borscht and the red line would mark off where they already had traveled. With the red line marking where they had been, they no longer would have to go around the desert in circles anymore. The people gave a name for this line of borscht. They called it “the Borscht Belt.”

The Jewish people finally reached the Promised Land, the Land of Israel, a land that in fact was flowing with milk and honey. However, as it was advertised in the brochure, the land had a population that was very hostile.

When the people saw that the land was already populated with the hostile population, they turned to Moses, and asked what to do.  Moses, by now old and frail, turned to the people and said feebly, “We hoped for the best, but….”

“Enough! We know. We know already. Don’t tell us. We only prepared for the worst.”

Joshua then turned to the people and said:

“We have been wandering in the desert for forty years. Am I the only person who is a bit cranky?”

The people responded in unison: “NO, we are all cranky too!”

Apparently, talking amongst themselves and sharing CrankaTsuris stories, both peoples realized that they were living their lives always only prepared for the worst. That just led to lots of CrankaTsuris. They got together and figured out how to prepare for the best, and the land thrived really becoming the land of milk and honey.

Steven Joseph is an excellent attorney, a remarkable writer of award-winning non-fiction for children and adults. Besides being humorous, his blogs discuss the concept of survival, managing emotions, and embracing the flavours of life. Steven believes life is a lot more fun when you master how to be effectively cranky!
PrevPreviousCrankaTsuris Noodles
NextGetting on My Nerves CrankaTsurisNext 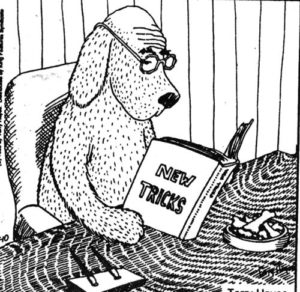 It is the start of a new year. Thank goodness. As with any new year, we begin with our New Year’s resolutions. However, I have 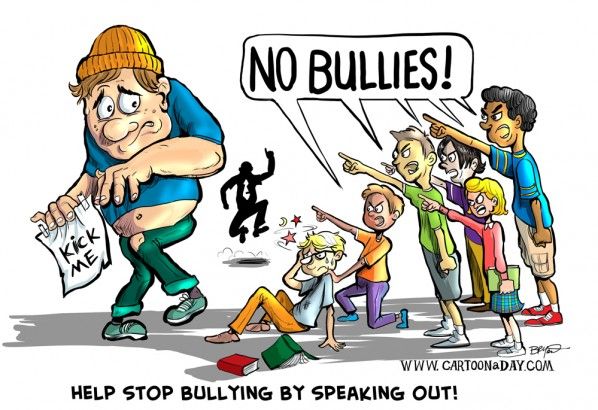 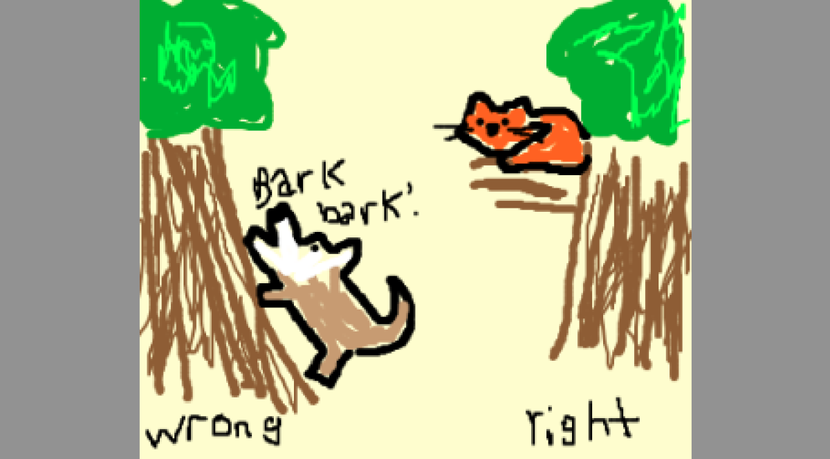